The online catalogue includes some 550 oil paintings and over 1700 works on paper dating from ca 1850 to 1903. The evolution of each painting from sketch to final oil is described and illustrated. Find out more
The Metaphor Map of English shows the metaphorical links which have been identified between different areas of meaning. These links can be from the Anglo-Saxon period right up to the present day so the map covers 1300 years of the English language. Find out more
The Scots Syntax Atlas presents the results of over 100,000+ acceptability judgments from over 500 speakers on over 250 morphosyntactic phenomena. The Atlas also contains a text-to-sound aligned corpus of spoken data totalling 275 hours and over 3 million words. Find out more
As told by some of Scotland's best writers, and illustrated with thousands of images from the collections of the city's world-famous libraries, museums and universities. From football to fashions, Auchenshuggle to Yoker, you'll find it all here. Find out more
James McNeill Whistler (1834-1903) was a major figure in 19th century printmaking and created 490 etchings. Over 9500 impressions of these prints have been located and investigated during the project, which completes a series of catalogues raisonnés of Whistler's oeuvre. Find out more
The Scottish Corpora project has created large electronic corpora of written and spoken texts for the languages of Scotland, featuring nearly 4.6 million words of text, with audio recordings to accompany many of the spoken texts. Find out more
The Digital Catalogue documents, visually and textually, the first ten years of Andy Goldsworthy's ephemeral, outdoor practice. It replicates Goldsworthy's Slide Cabinet Index, and includes previously unpublished material from Goldsworthy's Sketchbook Diaries. Find out more
Bess of Hardwick's Letters brings together, for the first time, the remarkable letters written to and from Bess of Hardwick (c.1521/2 or 1527-1608), one of Elizabethan England's most famous figures. Find out more
The resource provides ultrasound tongue imaging (UTI) and lip video of speech, magnetic resonance imaging (MRI) video of speech, and 2D midsagittal head animations based on MRI and UTI data. Find out more
A publicly accessible, online scholarly edition of one of the most important archives of eighteenth-century medical "consultation letters", containing more than 20,000 digitised pages. Find out more
project

The Metaphor Map of English shows the metaphorical links which have been identified between different areas of meaning. These links can be from the Anglo-Saxon period right up to the present day so the map covers 1300 years of the English language. 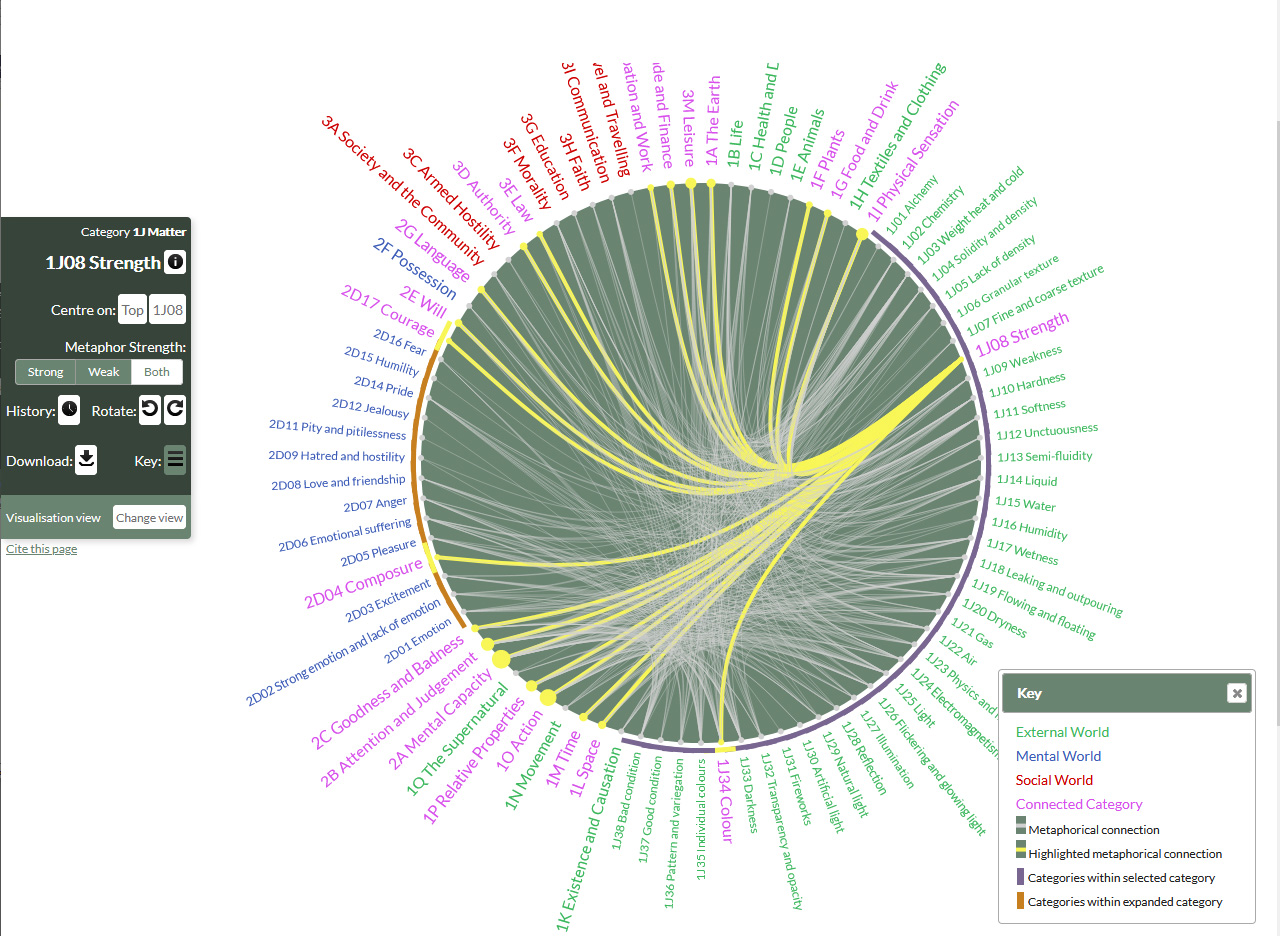 Metaphor map showing the connections between 'Strength' and other categories, with the category 'Emotion' expanded

Mapping Metaphor uses the database of the Historical Thesaurus to survey the workings of metaphor in English over thirteen centuries. Over the past 30 years, it has become clear that metaphor is not simply a literary phenomenon; metaphorical thinking underlies the way we make sense of the world conceptually. When we talk about "a healthy economy" or "a clear argument" we are using expressions that imply the mapping of one domain of experience (e.g. medicine, sight) onto another (e.g. finance, perception). When we describe an argument in terms of warfare or destruction ("he demolished my case"), we may be saying something about the society we live in. The study of metaphor is therefore of vital interest to scholars in many fields, including linguists and psychologists, as well as to scholars of literature.

Underlying the data and visualisations in the resource is a great deal of research. The evidence for the metaphorical connections presented is made as transparent as possible through links to the Historical Thesaurus of English online for each ‘example of metaphor’ and from there into the Oxford English Dictionary online. In order to identify areas of meaning which overlapped metaphorically, it was first important to identify areas which shared words. For this purpose, the Historical Thesaurus was divided into 415 distinct semantic areas (e.g. Light, Fear, Weapons and Armour, etc.), which are grouped into the 37 areas of experience corresponding to the second level of the Historical Thesaurus hierarchy (e.g. Matter, Emotion, Armed Hostility, etc.) and the three top-level groupings (The External World, The Mental World and The Social World). These 415 categories were then mapped against each other – all items of vocabulary in one category (the ‘start category’) were checked computationally with all the other categories. Where our queries found identical word forms then these were pulled out along with their sense and date information.

Once all of the overlapping vocabulary from the ‘start category’ was identified in every other category then it was analysed manually by a member of the Mapping Metaphor team. We were looking for lexical evidence that one area of meaning was being understood in terms of another, or had been in the past. A large percentage of the overlap reflected processes other than metaphor, such as homonymy and non-metaphorical polysemy. However, there were well over 10,000 connections in which we found evidence of metaphor. We were particularly interested in finding clusters of metaphorical overlap which provided evidence of a systematic connection between two semantic categories. For example, because of the conceptual link between weather and anger we find many of the same words in our categories of Weather and Anger, such as storm, tornado, wind and fulminate. If this was the case then we labelled this connection as ‘Strong’, while if we found a small number of lexical metaphorical connections between two categories but little evidence of a systematic connection then we labelled this as ‘Weak’. The initial coding was then checked by another member of the team and each link was examined separately in each direction (e.g. from Light to Cleverness and again from Cleverness to Light). The final stage of analysis was to decide on a final code based on the accumulated coding, comments from coders and the pinpointing of evidence from specific word senses in the Historical Thesaurus instantiating the metaphorical link. If we could not find specific evidence of metaphorical transfer in the overlapping words between two categories then the link was not regarded as ‘Metaphor’.