The resource includes historical research for all Berwickshire place-names on the Ordnance Survey 1:50,000 Landranger map, including more than 1,600 place-names and 7,000 historical forms presented via a series of interactive maps. Find out more
A database of all known people of Scotland between 1093 and 1314 mentioned in over 8600 contemporary documents. It is also being extended to 1371 to include all those lands, peoples and relationships mentioned in royal charters between 1314 and 1371. Find out more
The resource provides ultrasound tongue imaging (UTI) and lip video of speech, magnetic resonance imaging (MRI) video of speech, and 2D midsagittal head animations based on MRI and UTI data. Find out more
The University of Glasgow’s Historical Thesaurus of English is a unique resource charting the development of meaning in the huge and varied vocabulary of English. It consists of almost every recorded word in English from Anglo-Saxon times to the present day, all arranged into detailed hierarchies of meaning. Find out more
A publicly accessible, online scholarly edition of one of the most important archives of eighteenth-century medical "consultation letters", containing more than 20,000 digitised pages. Find out more
The Scottish Corpora project has created large electronic corpora of written and spoken texts for the languages of Scotland, featuring nearly 4.6 million words of text, with audio recordings to accompany many of the spoken texts. Find out more
Bess of Hardwick's Letters brings together, for the first time, the remarkable letters written to and from Bess of Hardwick (c.1521/2 or 1527-1608), one of Elizabethan England's most famous figures. Find out more
The project explores Romantic-period accounts of journeys into Wales and Scotland with a focus on the writings of the Flintshire naturalist and antiquarian Thomas Pennant (1726-1798), whose published Tours of both countries did so much to awaken public interest in the ‘peripheries’ of Britain. Find out more
The Scots Syntax Atlas presents the results of over 100,000+ acceptability judgments from over 500 speakers on over 250 morphosyntactic phenomena. The Atlas also contains a text-to-sound aligned corpus of spoken data totalling 275 hours and over 3 million words. Find out more
The project provides a richly-illustrated Catalogue of all known architectural projects by Charles Rennie Mackintosh, including over 1200 drawings by Mackintosh and the practice, analytical and contextual essays, a timeline and glossary. Find out more
project

The Scots Syntax Atlas presents the results of over 100,000+ acceptability judgments from over 500 speakers on over 250 morphosyntactic phenomena. The Atlas also contains a text-to-sound aligned corpus of spoken data totalling 275 hours and over 3 million words. 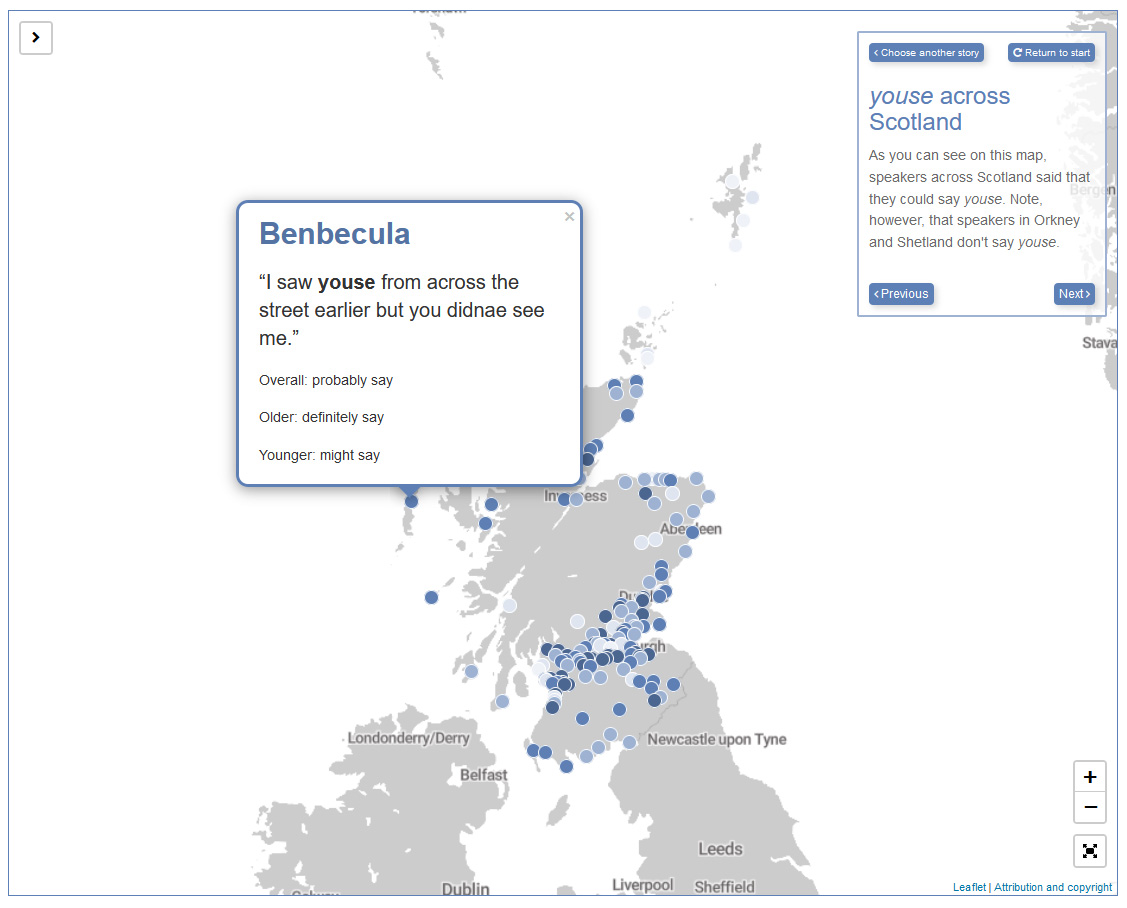 Atlas page showing the story of 'Youse' across Scotland

Would you say I like they trainers? What about She’s no caring? Have you ever heard anyone say I div like a good story? And might you say You’re after locking us out? All of these utterances come from dialects of Scots spoken across Scotland, but where exactly can you hear them?

To answer this question, the project team travelled the length and breadth of Scotland, visiting 145 communities, from Shetland in the north to Stranraer in the south. We were particularly interested in the different ways that sentences are built up in these different areas. This part of a language is called its syntax, and it’s one of the most creative aspects of how people use language. To understand more about the syntax of Scots, we asked people what they do and don’t say across these different dialect areas. For example, would you say I saw youse yesterday? Would you say I’m no been there in a while? We also recorded conversations with people across Scotland, where they talked about their lives, their communities, family and friends.

We then used both the answers to the questions and the recordings of speakers to map dialect diversity throughout Scotland.

You can explore what we found in the Scots Syntax Atlas. You can listen to different varieties of Scots, find out who says what where, and the stories behind some of the examples you hear.