The project explores Romantic-period accounts of journeys into Wales and Scotland with a focus on the writings of the Flintshire naturalist and antiquarian Thomas Pennant (1726-1798), whose published Tours of both countries did so much to awaken public interest in the ‘peripheries’ of Britain. Find out more
The project provides a richly-illustrated Catalogue of all known architectural projects by Charles Rennie Mackintosh, including over 1200 drawings by Mackintosh and the practice, analytical and contextual essays, a timeline and glossary. Find out more
The Metaphor Map of English shows the metaphorical links which have been identified between different areas of meaning. These links can be from the Anglo-Saxon period right up to the present day so the map covers 1300 years of the English language. Find out more
The Scottish Corpora project has created large electronic corpora of written and spoken texts for the languages of Scotland, featuring nearly 4.6 million words of text, with audio recordings to accompany many of the spoken texts. Find out more
The online catalogue includes some 550 oil paintings and over 1700 works on paper dating from ca 1850 to 1903. The evolution of each painting from sketch to final oil is described and illustrated. Find out more
The resource provides ultrasound tongue imaging (UTI) and lip video of speech, magnetic resonance imaging (MRI) video of speech, and 2D midsagittal head animations based on MRI and UTI data. Find out more
James McNeill Whistler (1834-1903) was a major figure in 19th century printmaking and created 490 etchings. Over 9500 impressions of these prints have been located and investigated during the project, which completes a series of catalogues raisonnés of Whistler's oeuvre. Find out more
As told by some of Scotland's best writers, and illustrated with thousands of images from the collections of the city's world-famous libraries, museums and universities. From football to fashions, Auchenshuggle to Yoker, you'll find it all here. Find out more
The Scots Syntax Atlas presents the results of over 100,000+ acceptability judgments from over 500 speakers on over 250 morphosyntactic phenomena. The Atlas also contains a text-to-sound aligned corpus of spoken data totalling 275 hours and over 3 million words. Find out more
The Digital Catalogue documents, visually and textually, the first ten years of Andy Goldsworthy's ephemeral, outdoor practice. It replicates Goldsworthy's Slide Cabinet Index, and includes previously unpublished material from Goldsworthy's Sketchbook Diaries. Find out more
project

A database of all known people of Scotland between 1093 and 1314 mentioned in over 8600 contemporary documents. It is also being extended to 1371 to include all those lands, peoples and relationships mentioned in royal charters between 1314 and 1371. 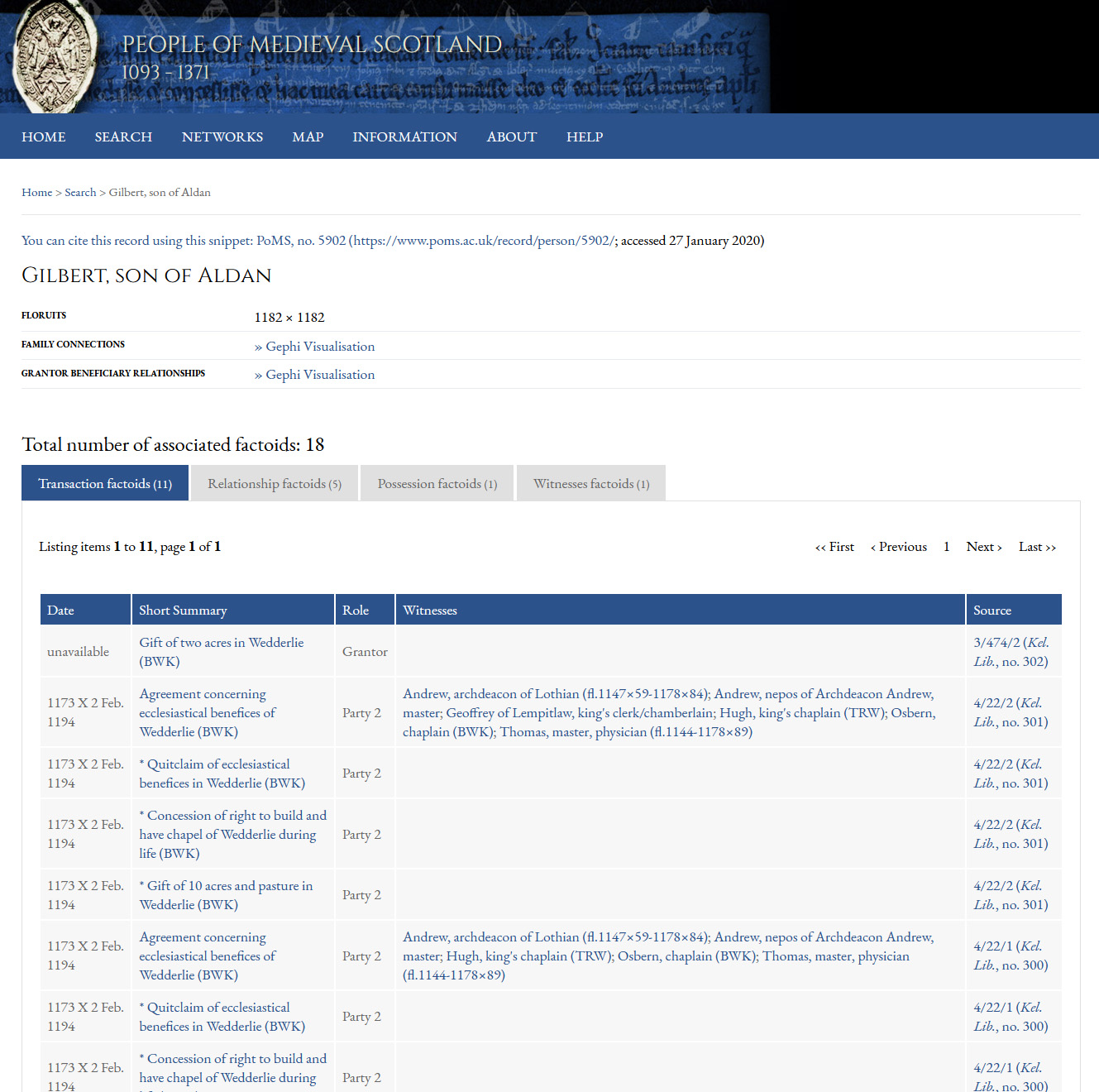 Database entry of records relating to 'Gilbert, son of Aldan'

The database contains all information that can be assembled about every individual involved in actions in Scotland or relating to Scotland in documents written between the death of Malcolm III on 13 November 1093 and Robert I's parliament at Cambuskenneth on 6 November 1314. The bounds of the kingdom of the Scots changed during this period; for the sake of consistency, the database covers all the territory that had become part of Scotland by the death of Alexander III. (This means that the Isle of Man and Berwick are included, but Orkney and Shetland are not.) Also, the database is not simply a list of everyone who is ever mentioned. It is designed to reflect the interactions and relationships between people as this is represented in the documents, and results can be viewed via interactive network diagram visualisations and geographical maps.

The database draws on over 8600 documents from this period that are directed by one or more individuals to others (either by name or in general terms). This allows the database to be structured according to the formal aspects of these documents, giving it the potential to be used not only a source of information, but also as a means of investigating the ways in which social relationships were mediated by the documents themselves. This additional dimension is not, however, given in the case of documents which pertain to English administration in Scotland (dated after 10 June 1291 when Edward I was recognised as overlord of Scotland). These documents are treated as a special category in the database, English Royal Administration (ERA).

It is important to bear in mind that this corpus of documents offers only a limited view of society. Some aspects came to be recorded routinely: the database makes it possible to see what these were, when they became routine and the particular types of document involved. Other aspects were only mentioned in passing, if at all, or were taken for granted without being stated in the text. A glossary has been provided to make it easier for beginners to make full use of the database's facilities, and also to allow experts to see how some of the more contentious technical terms have been applied. Although the corpus of documents used for the database represents the vast majority of sources for the history of Scotland in this period, it is important to note that other types of source, notably chronicles, are not included. (The principal Scottish chronicle for the 12th and 13th centuries, The Chronicle of Melrose, is being edited and translated as part of The Breaking of Britain project.)

The great majority of these documents have been published. Where there was a choice of editions, the most modern has been used. The project is particularly grateful to Elsa Hamilton, Cynthia Neville, Norman Shead, and Keith Stringer for making their unpublished editions of significant bodies of charters available. For each document a note is provided to indicate the publication that has been used. In some cases it has been necessary to go back to a manuscript source rather than use an edition.