The resource includes historical research for all Berwickshire place-names on the Ordnance Survey 1:50,000 Landranger map, including more than 1,600 place-names and 7,000 historical forms presented via a series of interactive maps. Find out more
Bess of Hardwick's Letters brings together, for the first time, the remarkable letters written to and from Bess of Hardwick (c.1521/2 or 1527-1608), one of Elizabethan England's most famous figures. Find out more
The project provides a richly-illustrated Catalogue of all known architectural projects by Charles Rennie Mackintosh, including over 1200 drawings by Mackintosh and the practice, analytical and contextual essays, a timeline and glossary. Find out more
As told by some of Scotland's best writers, and illustrated with thousands of images from the collections of the city's world-famous libraries, museums and universities. From football to fashions, Auchenshuggle to Yoker, you'll find it all here. Find out more
The resource provides ultrasound tongue imaging (UTI) and lip video of speech, magnetic resonance imaging (MRI) video of speech, and 2D midsagittal head animations based on MRI and UTI data. Find out more
The Scots Syntax Atlas presents the results of over 100,000+ acceptability judgments from over 500 speakers on over 250 morphosyntactic phenomena. The Atlas also contains a text-to-sound aligned corpus of spoken data totalling 275 hours and over 3 million words. Find out more
The Digital Catalogue documents, visually and textually, the first ten years of Andy Goldsworthy's ephemeral, outdoor practice. It replicates Goldsworthy's Slide Cabinet Index, and includes previously unpublished material from Goldsworthy's Sketchbook Diaries. Find out more
The Metaphor Map of English shows the metaphorical links which have been identified between different areas of meaning. These links can be from the Anglo-Saxon period right up to the present day so the map covers 1300 years of the English language. Find out more
The project explores Romantic-period accounts of journeys into Wales and Scotland with a focus on the writings of the Flintshire naturalist and antiquarian Thomas Pennant (1726-1798), whose published Tours of both countries did so much to awaken public interest in the ‘peripheries’ of Britain. Find out more
James McNeill Whistler (1834-1903) was a major figure in 19th century printmaking and created 490 etchings. Over 9500 impressions of these prints have been located and investigated during the project, which completes a series of catalogues raisonnés of Whistler's oeuvre. Find out more
project

A publicly accessible, online scholarly edition of one of the most important archives of eighteenth-century medical "consultation letters", containing more than 20,000 digitised pages. 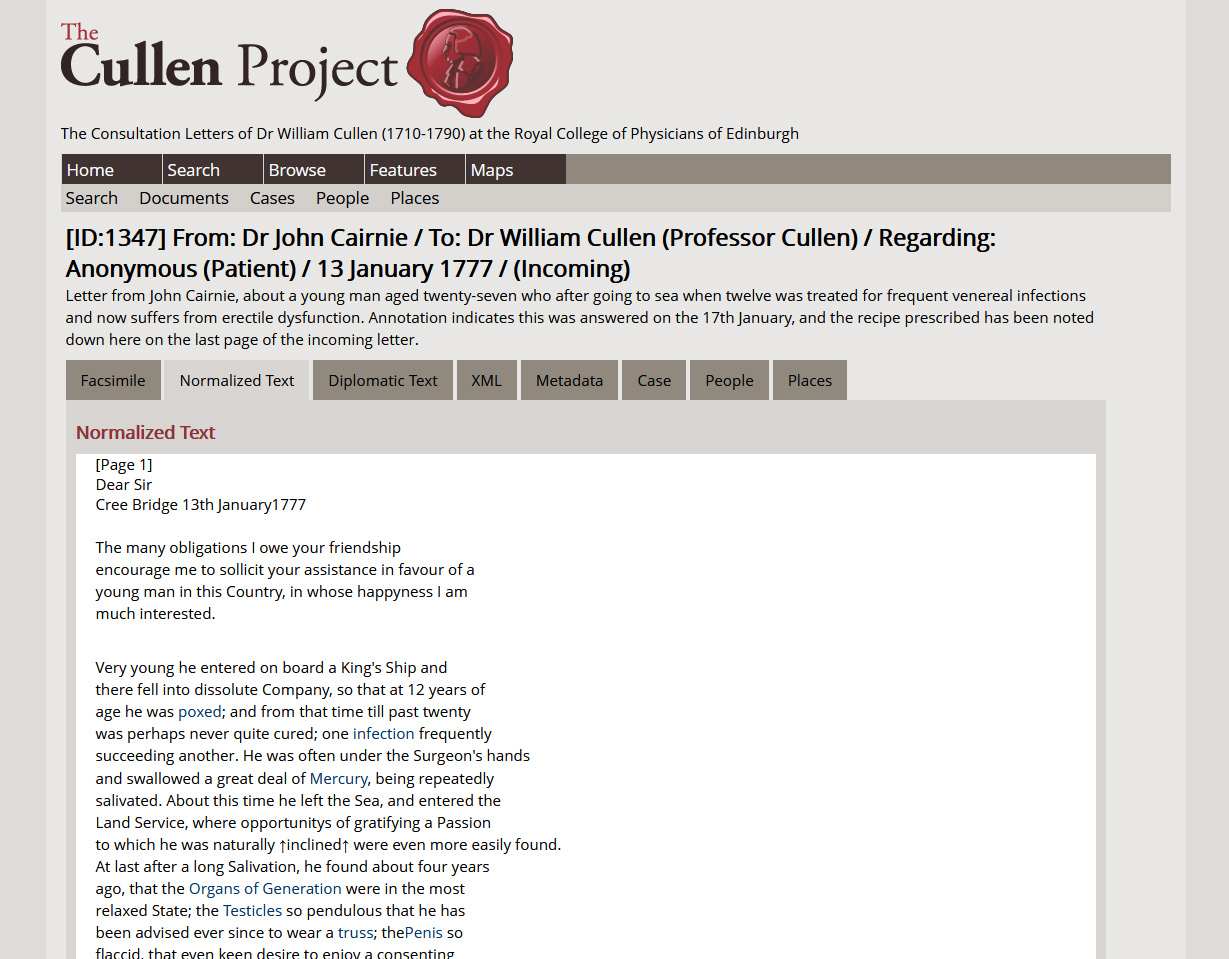 Letter from John Cairnie, about a young man aged twenty-seven who after going to sea when twelve was treated for frequent venereal infections.

This project, a collaboration between the School of Critical Studies at the University of Glasgow and the Royal College of Physicians of Edinburgh (RCPE), is funded by a major AHRC research grant award. The team created a publicly accessible, online scholarly edition of one of the most important archives of eighteenth-century medical "consultation letters".

William Cullen began his career as a medical lecturer and pioneer teacher of Chemistry at Glasgow University. He rose to international fame as the leading figure in Edinburgh University medical school and served as president of the RCPE. He was appointed the King's Physician in Scotland and became the most influential medical lecturer of his generation. Alongside his close associates David Hume and Adam Smith, Cullen played an important role in the Scottish Enlightenment.

Cullen's private consultations survive as a remarkable archive of several thousand letters. These include requests for advice from patients or close family members and referrals from attendant physicians and surgeons. Cullen retained his responses, initially as written transcripts then, from 1781, as duplicates made on a "mechanical copier" invented by James Watt. These exchanges with correspondents throughout Britain and abroad include some sustained autobiographical "illness narratives" and intra-physician exchanges. They provide a rich resource for gaining an historical insight into the experience of illness and the effort to cure disease.

The edition features innovative search facilities with supportive editorial apparatus and is of value to academics, practitioners, students and the general public interested in the history of